Recently I saw a teacher ask online about better font options in Google Sites. Actually I have always appreciated the limited fonts in sites, so students don't get "lost in fontland" looking for the perfect one among hundreds.

However, if you do want to spice up your headings, the video below shows one way to do it.

The short explanation is:


Snipping an image from the screen using different computers.

Sharing your virtual classrooms with students 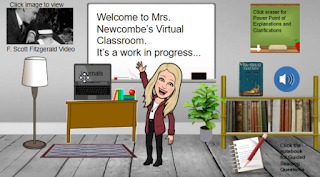 A couple months ago posts like this one helped make virtual classrooms all the rage. Teachers in my district discovered these, loved them, but have also asked for ways to share the final result with students. I'll share my suggestions below.

If you're unfamiliar with virtual classrooms, they're basically a slide (Google Slides works great) that lets you direct students to different links. This tutorial is the one that a teacher pointed out to me first and it's very well done. The article I linked to above has more information and several examples too.

So once you've made a virtual classroom, what's the best way to get it to students? Personally I prefer to publish the slide. Here's an example of how that might look. I prefer this to downloading a PDF or linking to the presentation because:


I made this short video showing how to publish a slide and get the link.

This video shows how to use the embed code to embed it on a Google Site. It's similar for other website creation tools. 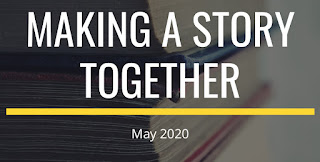 I did a lot of work with interactive stories over the period when school closed in the spring. It was a good challenge keeping students engaged at that time. I learned a few things that worked and some that didn’t.

I’ve been writing about these stories in one way or another for about three years now. At the core, they are stories told a bit at a time and they allow readers to provide feedback after each section is presented. You can read more about my favorite way to run these in class in this post.

This most recent experiment (called The Visitors) can be found on this Google Site. Here are some unique things I tried this time.


I’m pleased with how the story turned out overall. It reads like a first draft and the tone changes from a silly first chapter to a more serious tone in the last few. That’s the nature of these, I think.

The best thing for me was to see a couple students who faithfully followed the story and consistently gave positive feedback on each chapter. One student mentioned she also wrote a story for her family and used a feedback survey to collect opinions. Contagious creativity is a good sign we are on to something good!
Posted by mpetty39 at 5:09 AM No comments: 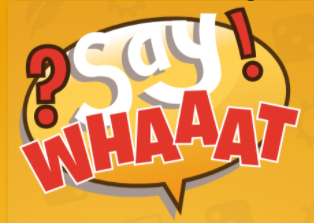 I created this updated classroom version of my party game, Say Whaaat?!, using Google Slides. It's "the game of What matters most?" It allows one student (or the teacher) to draw five random words and the class tries to guess how he or she would rank those things in order of importance.

I and other teachers have used it for a fun icebreaker or to kick off lessons about goals and decision making. We've used it in meetings with adults too. There are many ways to play, including using it in online teaching situations (live or otherwise).

First, click here to get your copy of the Google Slides presentation for the game. Full Disclosure:  Please enjoy this version for free, but be aware it is a bit of a promotional tool. I put a link on the second slide to Amazon where you can order copies of the actual game. I license the game to a publisher and will receive royalties from actual sales.

This video shows the basic idea, but read below for all details, including suggestions for use in online teaching.

I'll explain other ways to play below, but here's the general idea. 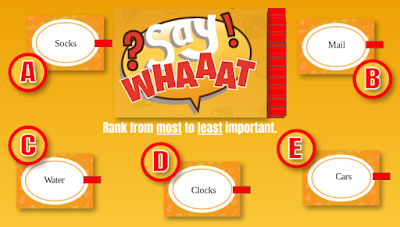 Other Ways to Play

A Note About Drawing Out the Words

There are a lot of words under that logo! If you keep using an unedited version of the Google Slide that I made, you might find you're always getting the same words in the initial rounds. That's because the words are in layers and you're always just pulling the words from the top layer. To solve this problem, draw several words out before you play and just delete them. That will ensure you're getting to the lower words in the stack. If you play multiple rounds and delete the words as they're used, this won't be such an issue.

I wrote a Designer Diary a couple years ago about the long history of this game. You can find it here on the Boardgame Geek website.
Posted by mpetty39 at 1:59 PM 1 comment:

3 Tips for Getting Started With Game Design

These videos were already shared in previous posts from my game design club series, but I wanted to get them in them one place. (I compiled some related interviews in this post.)

My goal with these videos was to concisely state three tips that would help students start making game. I use them to make board and card games, but they will help with digital games too. In fact, they form the basis of design thinking in any area.

Tip 1:  Learn and play many games. But don't play mindlessly!

Tip 2:  Keep a design notebook. Besides writing down ideas, use it to flesh your ideas out too.

Tip 3:  Start playing right away. This includes some tips for making rough prototypes.